Having finished my alphabet newsletter last month I’ve now decided to link into the ‘awareness’ months that happen throughout the year!  April is ‘Stress Awareness’ month so I thought I’d share some tools and techniques that I find useful to combat some of my stressors and hope you will find them helpful too. 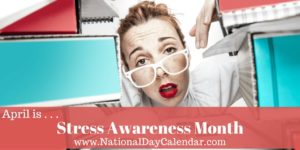 As you know, we all need a certain amount of stress in our lives to help us fire on all cylinders.  The adrenalin that stress creates provides the energy and focus to get on and do what needs to be done.  There are lots of studies that highlight during times of pressure we often perform very well and achieve more.  It’s linked to the fight or flight response mechanism which makes us feel more alert, so we can act faster and if our hearts are beating faster, the blood is sent to where it’s most needed whether that’s to our legs or our brains!

Stress only becomes problematic when there’s too much or too little as it affects not only the way you think, feel and behave but also how your body works, because your mind and body constantly interact.  Have you ever worked yourself into a frenzy by over thinking something when you’ve had too much time on your hands?  Or found yourself focusing on the stuff that really isn’t a priority when you’ve been rushed off your feet?  I now recognise procrastination as a key message to me that I’m feeling stressed.

Although stress is often caused by big events in our life such as losing a loved one, relationships, job and money, there are often smaller things behind the scenes that can cause us to feel stressed.  And it’s usually down to the way that we think about it which often has the repercussions in how we act and behave.  A colleague sent me this clip last week, which me made smile. 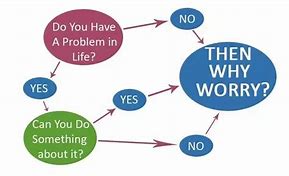 Worrying is a huge part of stress and I tend to rely on Stephen Covey’s Circles of Control and Influence to help me out.  Gather some post it notes (or scraps of paper) and note down every worry you have about a certain situation – one per post it. Draw three circles, each inside the other as illustrated below. 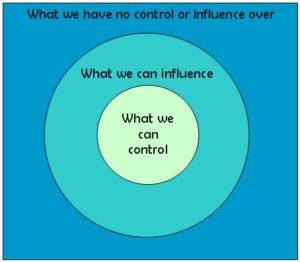 Now arrange your post it notes in the three categories of control, influence and no control.  It makes you see pretty quickly how much is actually in your sphere of control and where you need to start spending your time to get things done..

A while ago I watched a TED talk by Kelly McGonigal about making stress your friend.  When you have your next 15 minutes to spare, watch it here.  I think you’ll find it very interesting and it may alter some of the beliefs you currently hold about stress.

For me to think about stress as a way of the body protecting itself is really useful as it stops me from seeing it as a bad thing.  It also helps me to bear in mind we experience the same feelings when we’re both anxious and excited, so if I find the reasons to be the latter, I’m probably going to have a better outcome as a result.

It made me think about some of the ways I’ve started to manage my own stressors and I’ve listed them below as you may find them helpful too.

Letting go reminds me of a story ….. A lecturer when explaining stress management to an audience, raised a glass of water and asked ‘How heavy is this glass of water?’  Answers ranged from 20g to 500g. 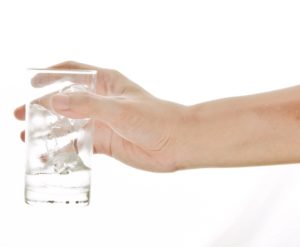 The lecturer replied, ‘The absolute weight doesn’t matter.  It depends on how long you try to hold it.  If I hold it for a minute, that’s not a problem.  If I hold it for an hour, I’ll have an ache down my arm.  If I hold it for a day, you may have to call an ambulance!  In each case, it’s the same weight but the longer I hold it, it becomes heavier.’  He continued, ‘and that’s the way it is with stress management.  If we carry our burdens all the time, sooner or later, as the burden becomes increasingly heavy, we won’t be able to carry on.  As with the glass of water, you have to put it down for a while and rest before holding it again.  When we’re refreshed, we carry on with the burden.  So, before you return home tonight, put the burden of work down!  Don’t carry it home.  You can pick it up tomorrow.  Whatever burdens you’re carrying now, let them go for a moment if you can and don’t pick it up again until after you’ve rested for a while.

So let me leave you with these light-hearted ways to deal with the burdens in life ….