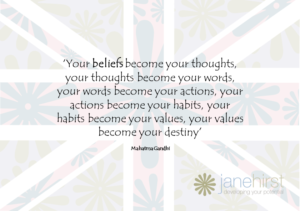 Have you ever had a thought or a dream of doing something differently and then dismissed it because you thought you were incapable of making it happen? We all allow our potential to be hampered by the limiting beliefs we hold about ourselves; negative things we’ve absorbed about ourselves over the years, such as emotions, experiences, habits etc from the people we thought.

In one of the programmes that I facilitate with The Pacific Institute, I get teams of people to create their belief wall. we use post it notes as the bricks of the wall and each brick holds a limiting belief. I see things like, I don’t want to look stupid, I’m not good enough, I’m not clever enough, etc. (In fact, some of the of limiting beliefs that have raised their head in the writing of this article!) The interesting thing is that we all hold so many similar limiting beliefs that have been stored on our subconscious from a young age. And because we’ve never gone back and challenged them, they’ve remained as the bricks in our wall, our barriers, to achieving the life we are destined to live.

At a period in our lives when a number of us have time to reflect, it might just be the right time for you to think about your own wall of limiting beliefs. Because when you look at the quote above from Mahatma Gandhi, it really does show the importance of having liberating rather than limiting beliefs. They are the foundations for everything we do, forming who we believe ourselves to be and what we are capable of doing. The key to remember in all of this is that these are the beliefs you hold about yourself and not truths. So with this in mind, I’d like you to think of that other famous Henry Ford quote – ‘if you think you can or you think you can’t you will’.

When you’re so focused on what you can’t do, reframe it! You may not be able to do it just yet, but you will be able to by putting the right right steps in place.

Instead of thinking about what could go wrong, don’t let your negativity bias take over. Instead, think about what could go right and if your negative voice pops up, tell it that you don’t have time for it right now and remain focused about the possibilities of positive outcomes. If there are some negative thoughts after completing this part, write them down and see what you can do to minimise the possibility of that occurring.

And if that isn’t enough to get you thinking of the things that you can do to achieve your goals, make a list of up to ten things you are really proud of and how it made you feel. What would you need to do to create the environment to feel like that again with your current goals? And if you need any more incentive, think about the activities that didn’t go so well and what enabled you to bounce back. You see we’re much more resilient and much more resourceful thank you think.